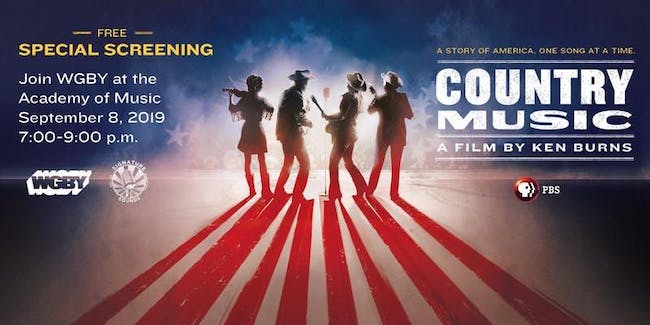 iCal
Google
Join WGBY and Signature Sounds at the Academy of Music in Northampton for an evening to celebrate Ken Burns’ upcoming film — Country Music.

Jim Olsen has been part of the local music scene since 1984. He was the Program Director for WRSI (The River) from 1984–1996 and continues to host its “Back Porch Radio” show. In 1994 Olsen and his partner Mark Thayer started the Signature Sounds Recordings label, which has released over 150 albums from a variety of roots music artists including Josh Ritter, Lake Street Dive, Chris Smither, Eilen Jewell, and many others. In 2012 Signature Sounds opened The Parlor Room, an intimate concert space in Northampton. Signature Sounds Presents produces over 120 shows per year including the annual Green River Festival, the Arcadia Folk Festival, and the “Signature Sounds Stage” at the WGBY Asparagus Festival.

Laura Cantrell is a country music artist, born in Nashville and currently based in New York City. She has performed on “A Prairie Home Companion,” “Mountain Stage,” and the “Grand Ole Opry.” Laura has released six albums in a recording career spanning twenty years and has toured extensively in the United Kingdom, Europe, and Ireland.

Jim Rooney is a Vermont-based musician, songwriter, recording engineer, music publisher, and Grammy-winning record producer who has worked extensively in Nasheville. He played an important part in the folk revival of the 1960s, managing the legendary Club 47 in Cambridge, MA, and then becoming a Director and Talent Coordinator for the Newport Folk Festival.

Select the $20 Preferred Donor Seating ticket for great seats. Your generosity supports the WGBY programs, events, and services that you care about. There is also a free ticket option.