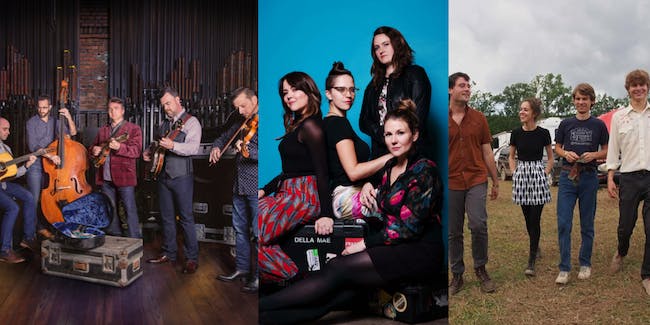 iCal
Google
Back Porch Festival Presents: Back Porch Bluegrass with The Travelin' McCourys, Della Mae, and Hawktail at Academy of Music

- First opportunity to buy tickets for other Back Porch Festival shows

From a source deep, abundant, and pure the river flows. It’s there on the map, marking place and time. Yet, the river changes as it remains a constant, carving away at the edges, making new pathways, gaining strength as it progresses forward. The Travelin’ McCourys are that river.

The McCoury brothers- Ronnie (mandolin) and Rob (banjo) - were born into the bluegrass tradition. Talk about a source abundant and pure: their father, Del, is among the most influential and successful musicians in the history of the genre. Years on the road with Dad in the Del McCoury Band honed their knife-edge chops, and encouraged the duo to imagine how traditional bluegrass could cut innovative pathways into 21st century music.

Since forming in Boston in 2009, Nashville-based string band Della Mae has established a reputation as a charismatic live act comprised of some of the finest players in bluegrass, Americana and beyond.

Originating from different musical backgrounds and states across the US and Canada, each member brings distinct elements that make Della Mae such a beloved band. Together they have a completely original style – sensitive yet assertive, intense yet playful, steeped in tradition yet undeniably current. Versatile instrumentalists and vocalists, they draw from a bottomless well of roots influences to create vibrant original music that conveys expansive musical vision. With timeless lyrical truth-telling and an unmistakably contemporary sensibility, they stand alongside such roots-conscious acts as the Avett Brothers, Punch Brothers, the Lumineers, and Hurray for the Riff Raff.

Haas Kowert Tice asked the question, what if? After forging their own brand of roots music—one grounded in timeless tradition, crafted by top-shelf musicianship, and performed with jubilant comradery—what if this trio of America's finest string players became a quartet?

Brittany Haas (fiddle), Paul Kowert (bass), and Jordan Tice (guitar) own the sweat equity of a decade spent stoking the fires of their passion project. Haas, whose 2004 self-titled release instantly became the touchstone for a generation of old-time fiddlers, has since lent her sound to Crooked Still, Live From Here, Michael Daves - and David Rawlings, where she plays alongside Kowert, well known as Punch Brothers’ virtuosic bass player. Tice is a rare guitar player whose music showcases his unique identity and a particular knack for tune-writing. Enter Dominick Leslie, the versatile mandolinist whose rhythmic sensibility has made him ubiquitous on the acoustic music scene (Noam Pikelny, The Deadly Gentlemen, Brotet).

Reborn a foursome, they recut the music for the next album. The release of Unless, in reality Hawktail's debut, is certain to confirm that this quartet has found its wings. “It feels as though this is now a whole band capable of doing anything,” says Haas. “The music of Unless represents hours of creation, founded on our years as close friends. And I think you can hear that,” she continues. Kowert adds, “we strove to write strong tunes that could take us to different places while holding to a simple form, for a natural music that breathes. Melodies and basslines arrived together with a core sound, and arrangements seemed encoded in the tunes.”