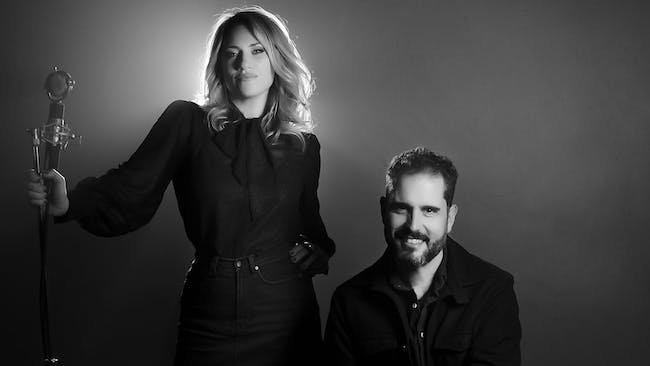 The musical partnership of guitarist Charlie Hunter and vocalist Lucy Woodward was forged under just such inauspicious, curveball-icious circumstances. In January 2018, shortly before he was scheduled to hit the road for a west coast tour with Mexican singer-songwriter Silvana Estrada, Hunter got word that Estrada’s visa had been denied by the U.S. Department of Homeland Security. Needing an emergency vocalist for the dates, Hunter reached out to Woodward, whom he knew through their mutual friends in the jazz/funk collective Snarky Puppy.

Soulful, spacious and deliciously in the pocket, Music!Music!Music! makes the most of the interplay between Hunter’s funky guitar and Woodward’s powerful voice. The album reverberates with the thrilling intensity of the duo’s live shows, while crackling with the electricity that results when two talented performers stretch out together from their respective comfort zones. Though Hunter utilized the unusual percussive slapping and picking technique that has characterized his playing for three decades, the sessions for the album found him jettisoning his custom-built seven-string guitars in favor of the “Big Six” created for him by Hillsborough, NC luthiers Hybrid Guitars. “It’s a big, fat-sounding machine,” he enthuses. “It has the three lower strings of a bass, and the three middle of a guitar, which works perfectly with Lucy’s voice — it keeps us from bumping into each other. The funny thing was, it was in a completely different tuning than the other guitars I’d been using, and I had to relearn all of the songs then and there. And that’s why there’s not a lot of fancy guitar playing on the album; most of what I’m doing is just staying in the groove and playing the right stuff.”