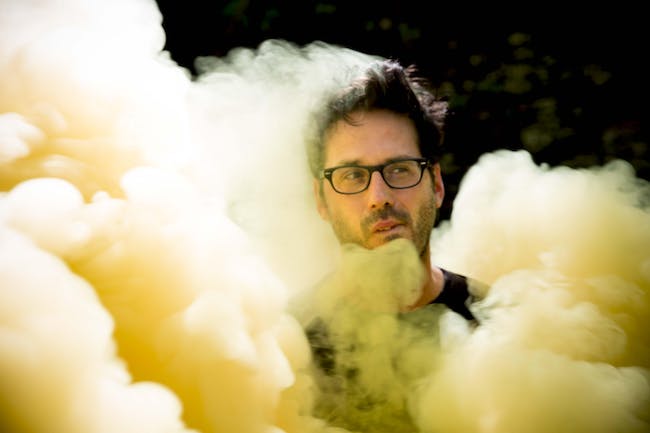 “The last ten years have been a rollercoaster of deep despair and amazing opportunities that somehow present themselves at the last possible second,” says Eef Barzelay. “That this record even exists, as far as I’m concerned, is a genuine miracle.”

Indeed, the road to ‘Forever Just Beyond,’ Barzelay’s stunning new album under the Clem Snide moniker, was an unlikely one, to say the least. Produced by Scott Avett of The Avett Brothers, the record is a work of exquisite beauty and profound questioning, a reckoning with faith and reality that rushes headlong into the unknown and the unknowable. The songs here grapple with hope and depression, identity and perception, God and the afterlife, all captured through Barzelay’s uniquely off-kilter lens and rendered with an intimate, understated air that suggests the tender comfort of a late-night conversation between old friends. Avett’s production is similarly warm and inviting, and the careful, spacious arrangement of gentle guitars and spare percussion carves a wide path for Barzelay’s insightful lyrics and idiosyncratic delivery. Listening to the album now, Avett and Barzelay sound like an obvious pairing, but the truth is that there was nothing obvious about the survival of Clem Snide, and the series of cosmic coincidences that led to ‘Forever Just Beyond’ remains inexplicable even to Barzelay himself.

“About ten years ago, everything just seemed to fall apart,” he explains. “The band bottomed out, my marriage was crumbling, I lost my house, and I had to declare bankruptcy. That started this process of ego death for me, where I realized the only way to survive would be to transcend myself and to try to find some kind of deeper, spiritual relationship with life and with being. Once I committed myself to that, miraculous things started to happen.”

Some miracles were financial (a superfan in Spain, for instance, sent Barzelay an unsolicited thank-you-for-the-music donation that covered the exact amount he desperately owed his bankruptcy lawyer); other miracles were more intangible. Roughly four or five years ago, as Barzelay struggled with how and if to carry on, a fan sent him a video of Scott Avett singing a Clem Snide song in front of a massive audience. Shortly after that, another fan sent an interview in which Avett raved about Clem Snide’s music. It seemed like a sign from the universe.

“I had just hit this low point where I realized I couldn’t do it alone anymore,” says Barzelay. “I passed along a little message and a new song I wrote to The Avett Brothers’ manager, and Scott wrote me right back to say what a fan he was.”

Avett was far from alone in his love for Clem Snide. Named for a William S. Borroughs character, the project first emerged from Boston as a three-piece in the early 1990’s and would go on to become a cult and critical favorite, picking up high profile fans from Bon Iver to Ben Folds over the course of three decades and more than a dozen albums. NPR highlighted the Israeli-born Barzelay as “the most underrated songwriter in the business today, with a sneakily firm grasp on poignancy and humor,” while Rolling Stone hailed his songwriting as “soulful and incisive,” and The New Yorker praised the music’s “soothing melodies and candid wit.” Avett came to the music late, only discovering it in 2016, but he fell hard, saying in an interview, “With Clem Snide’s songs, I feel like there is a voice that I understand very well… It just ignited my own writing. Which is the best flattery for me, that I listen to something and next thing I know I’m at the piano.”

If Barzelay’s music pushed Avett to write more, the feeling was certainly mutual. Avett’s interest in producing the next Clem Snide record was like a shot of adrenaline, and Barzelay quickly found himself deep in the writing process, with a slew of new songs he’d written both on his own and remotely with Avett.

“Scott offered so much encouragement to keep the faith with my career and write these songs,” says Barzelay, who trades off lead vocal duties with Avett throughout the album. “He and I come from very different backgrounds, but we both wrestle with the same things in our music, so there was this unspoken connection between us from the very beginning.”

“I look up to Eef with total respect and admiration,” adds Avett, “and I hope to survive like he survives: with total love for the new and the unknown. Eef’s a crooner and an indie darling by sound and a mystic sage by depth. That’s not common, but it’s beautiful.”

Rather than head into a traditional studio, the two decided to record the guts of the album on Avett’s farm in North Carolina, where they converted Scott’s painting space into a makeshift recording setup. They sourced a core band that included bassist Bill Reynolds (Band of Horses, Lissie) and drummer Mike Marsh (The Avett Brothers, Dashboard Confessional), and worked raw and loose to cut basic tracks live. Next, Barzelay headed to his adopted hometown of Nashville, TN, where he finished vocals and guitars and layered up additional parts from guests like Old Crow Medicine Show fiddler Ketch Secor and Avett Brothers cellist Joe Kwon. In the end, it was four long years between Avett and Barzelay’s initial introduction and the completion of the album, but those lean times provided the fodder for some of Barzelay’s strongest, most thought provoking writing to date.

“The line between desperation and inspiration has always been quite thin for me,” says Barzelay. “You don’t have to suffer to be an artist, but I think there’s got to be some heat on you, because the ultimate goal is always to turn sorrow into grace.”

That emotional alchemy is a defining characteristic of the record, which opens with the haunting “Roger Ebert.” Joined by Avett on harmonies, Barzelay spins the famed film critic’s final words into a gorgeous meditation on the mysteries of life and death on the track, which, like much of the album, seeks comfort in the acceptance of the inevitable. The breezy “Don’t Bring No Ladder” aims to shed the material trappings of the corporeal world, while the dreamy title track learns to find gratitude even in suffering, and “The Stuff Of Us” contemplates the infinite power of the unseen.

“All this flesh and blood, that’s not the realest part of us,” says Barzelay. “The real stuff is eternal and free. They say that 95% of the universe is held together by dark matter that we can’t see and we can’t measure, but we know it’s got to be there, and if that’s not a metaphor, than I don’t know what is.”

While much of the album tackles these big picture ideas, Barzelay’s strength as a writer has always been in his specificity, and he manages to humanize thorny existential issues on the record with a novelist’s deft touch. The bare bones “Emily” comes to terms with the fact that the only mind you can ever truly change is your own, while “The Ballad Of Eef Barzelay” offers a philosophical take on suicide and redemption, and the cinematic “Easy” considers the necessity of delusion to our survival.

“Everybody has their own reality,” says Barzelay. “We’re all just seeing the world through these little keyholes, but maybe that’s all our eyes can take.”

With ‘Forever Just Beyond,’ Barzelay opens his eyes just a little bit wider, and in the process, manages to show us a world beyond the world we know. And that? That’s a genuine miracle.