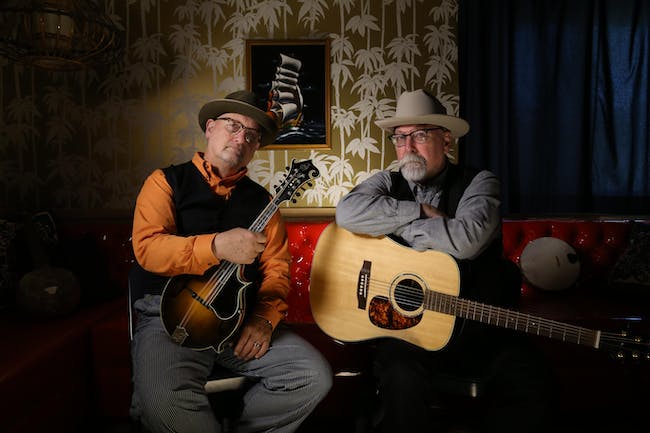 A Return to the Roots of Bluegrass!

Mike Compton and Joe Newberry mine one of the more neglected segments of country music history: the period during the ‘30s and ’40s when brother duet music was transitioning into, what is now known today as, bluegrass. Both masters of the bedrock instruments of old-time music, they collaborate with a vision that is both modern and ageless. As virtuosos of old-time mandolin, banjo & guitar, they dig deep into early country music and blues. With a seemingly limitless library of brother duets, audiences can expect to hear their favorite tunes along with traditional instrumentals, mother ballads and award-reaping originals. Their combined pedigree has enabled them to reach millions of people, including the more than 4 million regular listeners of A Prairie Home Companion, and also the of devoted fans of the Grammy Award-winning O Brother, Where Art Thou and Cold Mountain soundtracks.

“There are powerful people in every walk of life. Mike Compton is the General George Patton of the mandolin.” – CyberGrass.com

Mike Compton is a Grammy Award-winning, IBMA Mandolin Player of the Year nominee, mandolinist for the Nashville Bluegrass Band and longtime steady sideman to the late John Hartford. He has entertained from Carnegie Hall to the White House — and lots of good folks’ houses in between. The New York Times calls him “a new bluegrass instrumental hero.” He has made music with such diverse notables as the iconic Dr. Ralph Stanley, British rock legend Elvis Costello, guitar virtuoso David Grier and producer T-Bone Burnett. He has performed on 100+ CDs in a variety of genres with some of the most beloved artists of our day. At heart, Mike Compton is a preservationist, continuing the music that Bill Monroe innovated on the mandolin and which set the standard for two generations of bluegrass mandolin players.

“His lyrics read like a cross between Longfellow and Johnny Cash…The muse is sometimes gentle and other times rough. But she never strays too far from Joe Newberry’s side.” – Indyweek

Joe Newberry is a prizewinning guitarist, songwriter and vocalist known far and wide for his powerful banjo playing. He won the songwriting prize for “Gospel Recorded Performance” at the 2012 IBMA Awards for his song “Singing As We Rise”, and was co-writer [with Eric Gibson] of the 2013 IBMA “Song of the Year,” “They Called It Music.” A longtime guest on A Prairie Home Companion, he was a featured singer on the Transatlantic Sessions 2016 tour of the U.K., and at the Transatlantic Session's debut at Merlefest in 2017. Growing up in a family full of singers and dancers, he took up the guitar and banjo as a teenager and learned fiddle tunes from great Missouri fiddlers. He moved to North Carolina as a young man and quickly became an anchor of the incredible music scene in the state.