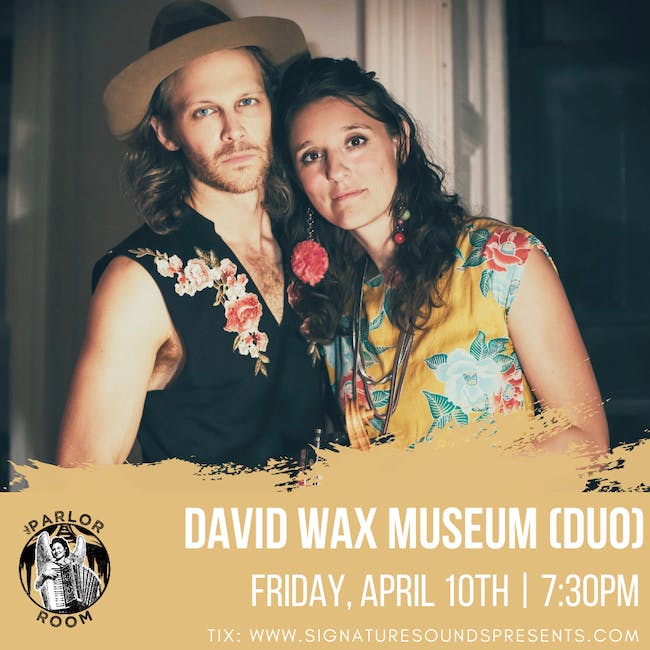 It’s been nearly a dozen years since David Wax and Suz Slezak played their first show together, kicking off a partnership that’s led to seven records, multiple Top 20 chart placements, performances alongside contemporaries like The Avett Brothers and heroes like Los Lobos, and — most importantly — a family of four. As that family has grown, so has the band’s sound. Filled with husband-and-wife vocal harmonies, Mexican stringed instruments, melodic hooks, and blasts of brass, David Wax Museum’s albums fly the worldly flag for a brand of Americana that reaches far beyond American borders.

Early in 2018, after honing a new batch of songs on the road, they found themselves making music in the Nashville-based home studio of Carl Broemel (My Morning Jacket’s, Ray LaMontagne) who produced David Wax Museum’s most compelling work to date, Line of Light. Released in 2019 by the Austin-based indie label Nine Mile Records, the album refocuses on the band’s two co-founders. Weaving the personal with the political, the global with the spiritual, Line of Light chronicles the landscapes and longings that connect us all.

Inspired by current events and personal challenges, Line of Light offers its own mix of message and melody. This is honest, heartfelt music about sweeping ideas, anchored in sharp songwriting and uncluttered by heavy-handed studio production. For those who caught one of David Wax Museum’s earliest shows — long before the group stole the show at the Newport Folk Festival, toured alongside Buena Vista Social Club, and earned an audience that’s as international as the band’s own sound — the album feels like a homecoming of sorts, sweetened with contributions from David Wax Museum’s full lineup but still grounded in the raw power of the band’s two-member core. It’s a bright album for murky times, a reminder of music’s ability to drive out the darkness, one song at a time.