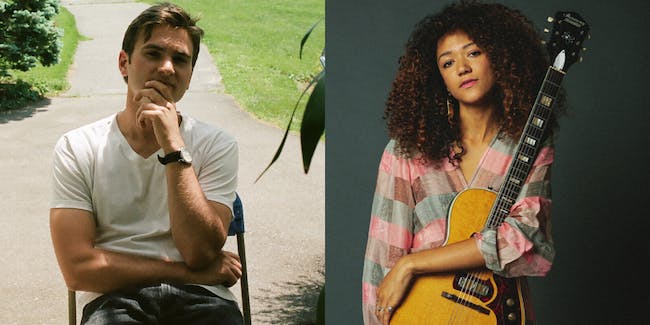 Jake Manzi’s 2016 debut “Singing to the Wall” opened some doors for the young Massachusetts based singer-songwriter. Along with headlining an East Coast club tour, Manzi earned opening slots with artists such as Lori McKenna, Ryan Montbleau, Tomberlin, Chris Collingwood (Fountains of Wayne), and Mark Erelli. That exposure, and lessons from the road, has fueled his passion for his art and resulted in a new batch of songs that will eventually become Manzi’s next recording. With influences like Randy Newman, Wilco, and Neil Young, Manzi continues his quest to tell stories and reflect universal truths through his songs.

Rooted in her jazz, folk, and opera musical background, Kimaya Diggs has mastered a genre-defying style. Inspired by the acrobatic folk renderings of Joni Mitchell, Ella Fitzgerald’s jazz stylings, and Lianna LaHavas’ soulful charisma, she draws skillfully from her lineage of musical pioneers, creating a musical lane all her own. With a playful presence and frank, transporting storytelling, Diggs’ mastery of her voice is the focal point of each performance, and a transfixing experience.

Kimaya’s debut album, “Breastfed” (2018), is a bittersweet chronicle of growth toward the light. Recklessly urgent, irreverent and defiant in the face of the past, “Breastfed” boldly wrangles the pain and glory of a growing-up narrative, claiming its narrative with spirit and dark humor. The single “How Am I Sposta Know” made the top 10 in tastemaker radio station 93.9 The River’s Best New Songs of 2018.