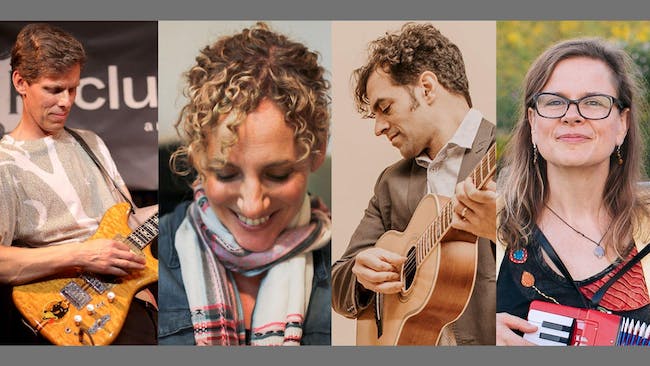 An Acoustic Celebration of The Grateful Dead

Dead to the Core

iCal
Google
Jeffrey Pepper Rodgers' Dead to the Core: An Acoustic Celebration of the Grateful Dead at The Parlor Room

DEAD TO THE CORE: AN ACOUSTIC CELEBRATION OF THE GRATEFUL DEAD

Dead to the Core is a collective of singer-songwriters and acoustic musicians, led by musician/author Jeffrey Pepper Rodgers, with a shared love of the Grateful Dead. In intimate concerts, the musicians celebrate the band’s music not through note-for-note re-creations but by playing the songs their own way—letting them grow and evolve collaboratively in the true spirit of the Dead.

Interspersed with the music are clips from Rodgers’ own interviews with Jerry Garcia and Bob Weir, in which they reflect on the roots and evolution of the music.

A Dead to the Core show is an experience unlike any other Grateful Dead tribute: a night of deeply personal performances that illuminate the masterful song craft and storytelling of one of America's most original bands. Grateful Dead music right down to the core.

“Rodgers doesn’t tap the legion of dedicated Grateful Dead tribute artists for these concerts…. Instead, he seeks out songwriters and musicians who have developed their own voices and styles, though they are very much inspired by—and fans of—Garcia and the Dead.”

Natalia Zukerman is a musician, painter, and educator based in Brooklyn who has accompanied and opened for acoustic music greats such as Janis Ian, Susan Werner, Shawn Colvin, Ani DiFranco, Richard Thompson, and Tom Paxton.

“Natalia’s voice could send an orchid into bloom while her guitar playing can open a beer bottle with its teeth.”

Anand Nayak is a Grammy-nominated producer, songwriter, and multi-instrumentalist who performs with Rani Arbo and daisy mayhem, Corey Laitman, Alastair Moock, and many more.

"Anand Nayak is a natural musician, instinctive and inventive."

Jeffrey Pepper Rodgers is founding editor of Acoustic Guitar magazine and author of a best-selling video series teaching his acoustic arrangements of classic Grateful Dead songs. Joining him is multi-instrumentalist/songwriter Wendy Ramsay, his partner in the duo Pepper and Sassafras.