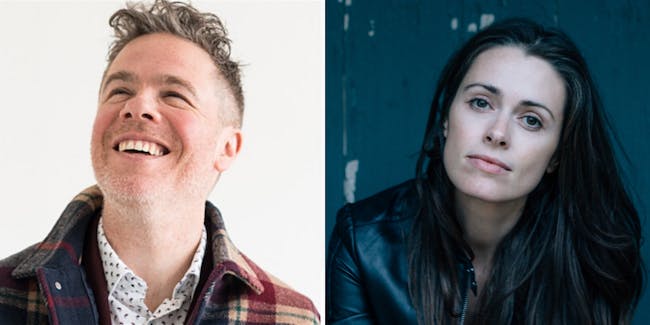 “Josh Ritter? Hell, he was born dead center of the whole country, who else is gonna tell us what it’s really like.” That’s Jason Isbell, who knows a little something about songwriting, on why Josh Ritter’s songs are so important right now.

What must it feel like, to do what Josh Ritter can? To be able to see the world clear as it is, to be able to hold in your mind the various ways it might roll, spin or cant, to draw these versions for us in a few, perfectly chosen words, set to melodies as instantly memorable as they are fresh?

I imagine it must feel like a calling and a burden, and must bring about in Ritter a sense of gratitude and obligation—To hear those voices, those couplets, those musical lines and to know that there are so many of us waiting for him bring them to us, like a basket of just ripened tangerines on an arid summer day, exactly what we need at the exact moment we most need it.

There is a hint for us in the title of Josh’s new album, Fever Breaks. And listening to it, I can sense the fever that took hold of Josh as he was writing, the insistent, all encompassing waves of emotion and heat, the chills and shakes that blew through him and finally broke just before it would have killed him.

This urgency shows itself in the songs he wrote, in the playing and singing that elevates the recordings into incantations of hope in desperate times, into that one ray of light sneaking its way through the one needle sized hole in the ground above the collapsed mine shaft we are all stuck in: the United States of America in 2019.

“In between nothing but the thin air and the unknown,” Ritter sings in On The Water, describing not only the fragile state of a relationship, but also the state of the US as he apprehends it at this particular moment in history. But one of Josh’s many gifts is that, even as he documents the meanness, the songs themselves lift us out of it, into a place of reverie.

As I listen, I find myself singing along, laughing, entered into a shared place of joy. This is secular church music, because it unifies us, bonds us, brings us together in a search for love, peace, understanding and an escape from the earthly cruelty all around us.

When I asked Isbell, who produced Fever Breaks, what it was about Josh Ritter’s music that made him want to collaborate with Josh, he spoke of Ritter’s perfectionism, of Ritter’s willingness to do the work required to turn an instant of inspiration into a great song. And then he got quiet for a long moment. “Look,” he said. “This American experiment is getting to the point where we need to call for help. We’re not under water yet, but we are stuck on the rocks. Josh’s music is a perfect document of these times.”

Caitlin Canty is an American singer/songwriter whose music carves a line through folk, blues, and country ballads. Her voice was called “casually devastating” by the San Francisco Chronicle and NPR Music describes her songs as having a “haunting urgency.”

Since the release of her critically-acclaimed Reckless Skyline in 2015, Canty has put thousands of miles on her songs, circling through the U.S. and Europe. She warmed up stages for Mary Chapin Carpenter, The Milk Carton Kids and Josh Ritter and recorded with longtime collaborators Darlingside and with Down Like Silver, her duo with Peter Bradley Adams. She won the Troubadour songwriting competition at the Telluride Bluegrass Festival, and her song, “Get Up,” was nominated for Song of the Year in the Folk Alliance International Music Awards. Canty’s original recordings have recently appeared on CBS’s Code Black and on the Netflix original series House of Cards.

Raised in small-town Vermont, the daughter of a school teacher and a house painter, Canty earned her degree in biology in the Berkshires and subsequently moved to New York City. She spent her days in the city working as an environmental sustainability consultant and her nights making music at Lower East Side music halls and bars. In 2009, she quit her job and set out to make music full time. In 2015, she packed up her house plants and her 1939 Recording King guitar and drove to Nashville, TN, which she now calls home.