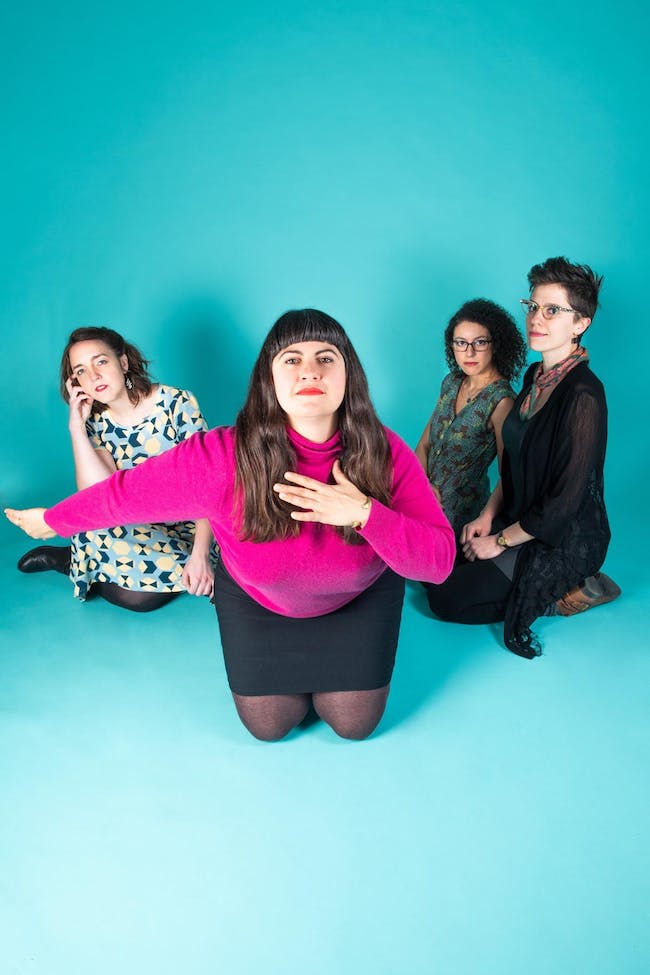 Laura Cortese is an instigator of creativity and a builder of community wherever she goes. She wears many hats: fiddler, singer, songwriter multi-instrumentalist and bandleader. After wending her way from California to Boston, founding a music camp and a festival, and playing and singing with scores of artists, she assembled the Dance Cards: a quartet of singing string players. Their original music is based in the lyrical rituals of folk while exploring new territories of rhythm and sonics. At first glance, the band may resemble a string quartet – there are no guitars to be found. But from the moment Cortese kicks off the title track of her album CALIFORNIA CALLING with angular, percussive strumming and a powerfully sultry vocal, it’s clear that this is something else. This is post-folk that seriously rocks.

The Dance Cards’ sound moves seamlessly from gauzy, ethereal vocal harmonies (“The Low Hum”) to rowdy indie-rock percussion (“Stockholm”) to propulsive fiddle melodies directly from Appalachia or Scotland (“Swing & Turn”). Their lyrics deftly explore heartbreak, independence, and the restless search for a home in the world. It’s pop music at heart, born from the roots tradition and traveling the roads of 70s California, but now planted firmly in the post-genre modern day. On the band’s Compass Records debut album, CALIFORNIA CALLING, the band’s indie sensibility comes to the fore with the support of producer Sam Kassirer, known for his work with pop favorites Lake Street Dive and indie stringband Joy Kills Sorrow. The songs’ inventive, textural string arrangements are complimented by a piano here, a synth there, even a glass harmonica, but never overpowered. The vocals and strings are spacious and dreamy one minute, immediate and powerful the next. It’s no wonder that fRoots Magazine described the album as “an absolute winner … skilled, heartfelt writing, gorgeous performances and a sense of vision.”

Before forming the Dance Cards, Laura Cortese’s career included stints as an instrumentalist with Band of Horses, Pete Seeger, Rose Cousins, Jocie Adams (of the Low Anthem), and Uncle Earl. The collective credits among the Dance Cards exist on a broad continuum from Darol Anger to Amanda Palmer, from the symphony to prog rock, and even into protest music like Pete Seeger and Michael Franti. The band has leaned towards protest music themselves: they assembled a group of 65+ women and femmes of all ages, races, and nationalities for their “Pace Myself” music video, which both exposes and defies the ways in which the world tries to keep women down. They have also twice served as U.S. State Department cultural ambassadors, traveling to India, Kazakhstan, Uzbekistan, Bangladesh, Ukraine, Estonia, Montenegro and Greece to exchange musical traditions and foster cultural understanding. The band has toured and performed at premier festivals throughout the United States, Canada, the UK, Europe, and Scandinavia.

Laura Cortese & the Dance Cards is a band who draws inspiration from diverse experiences, communities, and musical traditions, melding them into a refined sound that’s broad-minded but clear-eyed. It’s not a stringband, not a string quartet, not an a cappella group or indie band, but somehow all of those at once, all while staying firmly rooted in an identity as folk instrumentalists. It’s adventurous and complex music delivered with power and heart.