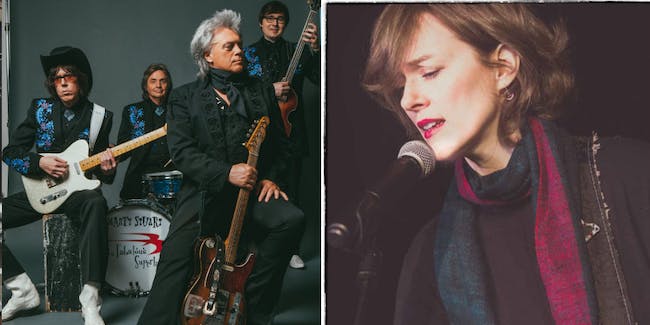 While he’s too gracious to admit it himself, the Grammy-winning singer, songwriter and musician is living, breathing country-music history. He’s played alongside the masters, from Cash to Lester Flatt, who discovered him; been a worldwide ambassador for Nashville, Bakersfield and points in between; and safeguarded country’s most valuable traditions and physical artifacts. Including its literal shoes: Stuart counts the brogan of Carter Family patriarch A.P. Carter and an assortment of Cash’s black boots among his vast collection of memorabilia.

But most importantly, Stuart continues to record and release keenly relevant music, records that honor country’s rich legacy while advancing it into the future. Way Out West, his 18th studio album, hits both of those marks. Produced by Mike Campbell (of Tom Petty and the Heartbreakers), the album is a cinematic tour-de-force, an exhilarating musical journey through the California desert that solidifies Stuart as a truly visionary artist.

When it comes to transforming country songs into tangible experience, Stuart has a secret weapon: the Fabulous Superlatives. Made up of guitarist Kenny Vaughan, drummer Harry Stinson and new member, bassist Chris Scruggs, the Superlatives are an extension of Stuart himself.

Laura Cantrell is a Nashville-born, New York-based country music artist. Since her critically acclaimed debut, 2000’s Not The Tremblin’ Kind, Cantrell’s music has been celebrated in The New York Times, “O” Magazine, Elle, and the Wall Street Journal, and has been featured on NPR’s “All Things Considered,” and “Weekend Edition.” She has performed on “A Prairie Home Companion,” “Mountain Stage,” and the “Grand Ole Opry,” and appeared on “Late Night with Conan O’Brien,” and Sundance Channel’s “Spectacle: Elvis Costello.”

Laura also hosts “Dark Horse Radio,” a weekly program about George Harrison featured on SiriusXM’s The Beatles Channel, and “States of Country” on streaming service GimmeCountry. In 2020, Cantrell will release new music and is commemorating the 20th anniversary of her debut, Not The Tremblin’ Kind.