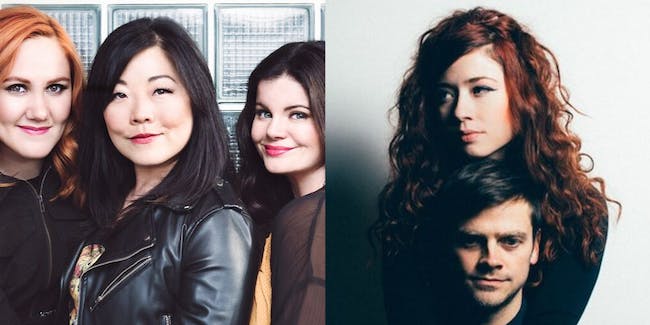 The Sea The Sea

When Nobody’s Girl (aka BettySoo, Rebecca Loebe, and Grace Pettis) began discussions with their label, Lucky Hound Music, about recording a full length album (a follow up to their critically acclaimed EP, Waterline), the idea to start with one new song, but maybe to do a few Christmas songs too was floated. That idea totally jived with their sensibilities and sounded fun, too. They chose two songs, “Someday at Christmas,” and “Merry Christmas, Baby.” Both tracks will be released digitally, worldwide, on October 25th.

The new original song they recorded, “Kansas,” won’t be heard until we all know what the record actually is. There will be more recording sessions in September and January. In the meantime, on November 1st, Nobody’s Girl’s version of “Fast Car”– yes, the Tracy Chapman cover that basically launched them via some viral Facebook video action before they even went under the moniker of “Nobody’s Girl”– will be released digitally, worldwide. That video, since disappeared, has been re-branded and will re-appear this fall around the single’s release.

Hailing from Texas, Alabama, and Georgia, respectively, and now neighbors in Austin, BettySoo, Grace Pettis, and Rebecca Loebe have individually bewitched audiences with unforgettable songwriting for years. Friends now for a decade, they first met at the legendary Kerrville Folk Festival, each winners of the prestigious annual “New Folk” award there. Beautiful singers, effortless instrumentalists, and seasoned touring artists– they recognized that what each can accomplish individually could be made all the stronger by this collaboration.

Originally, the band was conceived as a one-time tour; a chance for three friends & like-minded peers to travel and perform together for a few weeks. The of their Tracy Chapman’s “Fast Car,” cover was hastily created to promote that tour before garnering over twenty thousand views on Facebook within days of posting. Coupled with that 20-city tour, the spark had been set, the fire lit. Upon their return, they quickly (within 36 hours) wrote some songs together and entered the studio with a core band of Austin all-star musicians: David Grissom (guitar), Glenn Fukunaga (bass), J.J. Johnson (drums), Ricky Ray Jackson (pedal steel) and Michael Ramos (keyboards, also the producer of the project) to document what they’d just created.

Delving into pop-rock and soul territory fully and deliciously, their pristine voices blend so well, it’s sometimes hard to tell who’s singing what - even for them. The effect is like listening to sisters, until they trade off lead vocals. Then the distinctive, complementary elements of their voices becomes thrillingly evident. Their debut EP Waterline (under the band name “Nobody’s Girl”) on the Lucky Hound label is out now!

THE SEA THE SEA

is an Upstate New York based indie folk-pop duo-band featuring what Huffington Post calls, “Two of the loveliest male-female voices you might ever hear this or any other year.” Their 2014 debut release, Love We Are We Love, received praise from NPR, American Songwriter, and No Depression, among others, gathering over 15 million streams on Spotify. The animated video for their song "Waiting" sparked viral interest including Buzzfeed, Pitchfork, and inclusion at the international TED 2015 conference. Mountain Stage host Larry Groce calls them "ready to take their place among the best young male/female duos now performing." Their 2016 release, the six-song EP In the Altogether, earned features by Apple Music including "Best of the Week" and "A-List Singer/Songwriter." Recently, Paste Music / Daytrotter described the band as "defined by their infallible vocal harmonies and their unconventional song arrangements. The Sea The Sea is a pop band only in their melodic infectiousness—otherwise they are at their best when subverting conventions."