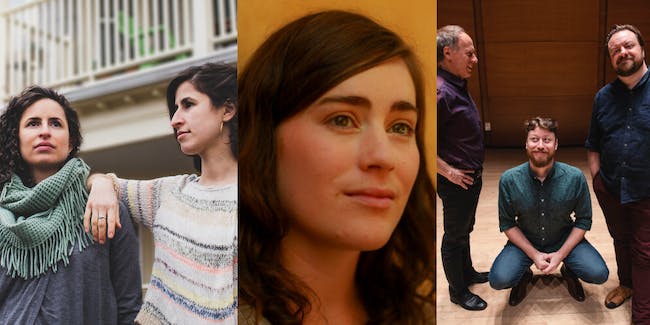 Two extraordinary Americana trios [Ari & Mia w/ Lucy Wise, and KALOS (Eric McDonald, Ryan McKasson, Jeremia McLane)] are crossing paths in Western Mass and we're lucky to have caught them on the same night. Plus, this is a Parlor Session, followed by an all comers jam. Imagine that jam, with these six players and all other musicians in the room. A cure for mid-winter.

New England’s favorite sister duo, Ari & Mia, team up with Australia’s Lucy Wise, “a wonderfully natural singer and uncommonly gifted writer” (ABC Radio National). This will be the third tour for the trio who, despite the distance, think of each other as musical soulmates. They’ve covered the east coast of Australia (2014), parts of the United States (2016) and eagerly anticipate their upcoming February 2020 tour around the northeast.

“Strikingly beautiful, distinctive and exhilarating, with expressive vocals that will find a way into hearts and minds” (No Depression), Ari & Mia reference the styles of Southern and Northeastern fiddle music and the early American songbook to create a realm where their own compositions cross paths with older traditions. “Ari & Mia are not creating a new music; they are taking it to another level and exploring areas that have not been attempted in decades. Their all-acoustic, pure and honest approach has significance…with lyrical wizardry and searing harmony as good as The Beach Boys,” continues No Depression. Both award-winning songwriters, the sisters have toured all across the U.S and Australia and are graduates of New England Conservatory's cutting edge Contemporary Improvisation department. Their brand new album, “Sew the City,” released on March 1, 2019, was premiered on Billboard Magazine and has been met with critical acclaim. Their previous three albums—”Out of Stone,” "Land on Shore," and "Unruly Heart"—ranked high on the national folk radio charts. www.ariandmiamusic.com for more info.

ABOUT LUCY WISE (joining Ari & Mia as their third)

Lucy Wise is a Melbourne-based multi-instrumentalist, singer and songwriter. Accompanying herself on guitar, ukulele and Appalachian dulcimer, she creates a contemporary sound that draws upon her roots in folk, old-time American and Celtic music. The evocative imagery and universal themes in Lucy’s songs have won the hearts of listeners from a diverse range of backgrounds and have seen her tour three albums and two EP’s in Australia, NZ, the US and the UK. Lucy’s latest album, “Winter Sun” was received with critical acclaim: a 4.5 star review in the Weekend Australian and a nomination for The Age Music Victoria Awards’ Best Folk or Roots Album. She explores themes of love, friendship and the relationships people form with their environment. “Lucy infuses songs with a sense of place so strong you can almost feel the dusty earth crunch beneath your feet as she sings,” says The Brag.

Ryan McKasson, Eric McDonald and Jeremiah McLane are masters of tradition who purposefully explore the dark corners floating on its edges. Their individual artistry is enhanced when together. In short, the sum creates a greater whole. The result is an alluring complexity, full of spontaneous musicality. Pulling from parallel strands of influence, they create a swirling level of intensity that traverses darkness, light, and everywhere in between. An air of mystery pervades a sound compelling enough to transcend boundaries and appeal to music lovers of all stripes. Devon Leger of Hearth Music says, “This trio really shows how masterful musicians listen and play off each other." The music they create is to share, and live performance is the forte. But their mutual attitude stretches beyond the music. They have been good friends ever since they met, and this is present in their live performances, which are full of organic banter and good humor to go along with the music. They create an environment of their own design, drawing in listeners without pretense. Despite living active musical lives thousands of miles apart these musicians have committed to working together to forge a new musical path.

Ryan, Eric and Jeremiah create music together that is at once energetic, sublime, pensive, thought provoking and jubilant. — Steve Behrens, 67 music

There’s a certain spontaneity at work as the three musicians alternately contest and duel, combine and coalesce to bring their talents together. — Tim Carroll, Folkwords.com