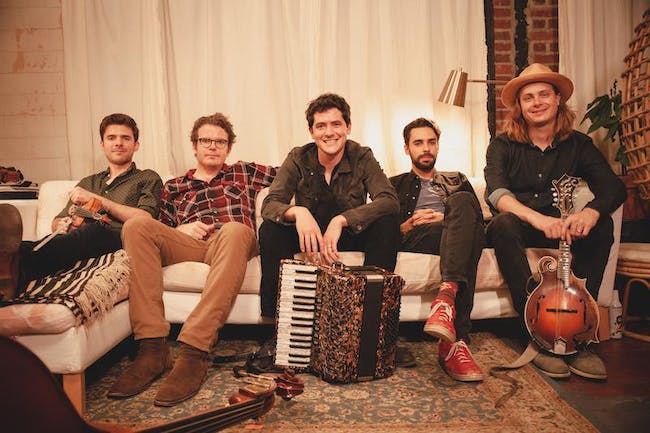 "Dashes of folk influences from around the world are sprinkled into its string band aesthetic.. Reider’s accordion is the unyielding anchor, giving a dose of soulful, raw timelessness, but with a modern crispness and confidence.” - The Bluegrass Situation.

Sam Reider is an American accordionist, pianist, composer, and singer-songwriter. He’s been featured at Lincoln Center and on NPR and collaborated with pop stars, jazz and folk musicians around the world. Reider is the leader of a “staggeringly virtuosic band” (RnR Magazine) of bluegrass and jazz musicians based in Brooklyn called The Human Hands.

Following the release of their critically-acclaimed record Too Hot to Sleep (2018), Sam and the Human Hands have appeared at major festivals and venues throughout the US and the UK and performed live on the BBC. Irresistible melodies, fiery improvisation and otherworldly sounds collide in what Songlines Magazine has dubbed "mash-up of the the Klezmatics, Quintette du Hot Club de France and the Punch Brothers.” Too Hot To Sleep features Eddie Barbash (The Late Show with Stephen Colbert, Jon Batiste and Stay Human), Alex Hargreaves (Turtle Island Quaret, Live From Here, Sarah Jarosz), Dominick Leslie (Hawktail, Ricky Skaggs Band, Deadly Gentlemen), Roy Williams (Stephane Wrembel), Grant Gordy (David Grisman Quintet) and Dave Speranza.

Reider grew up in San Francisco, the son of a musical theatre composer and klezmer musician. He began performing at a young age, and was interviewed on Marian McPartland’s “Piano Jazz” on NPR when he graduated high school. At Columbia University, he fell in love with American folk music. While writing his senior thesis comparing the songwriting of Woody Guthrie and Ira Gershwin, Sam began studying bluegrass and old-time, transcribing the fiddle melodies for the accordion and learning to sing the songs. This set him off on a journey that has taken him from back porches and dive bars to concert halls and major festivals in practically every state in the country.

Representing the U.S. Department of State as a musical ambassador, Sam has travelled to China, Laos, Cambodia, Myanmar, Vietnam, Estonia, Turkey and Azerbaijan, carrying his accordion on his back everywhere he goes and collaborating at with international artists. Sounds and stories from these travels frequently serve as the inspiration for Reider’s compositions, which together form an ongoing musical travelogue.