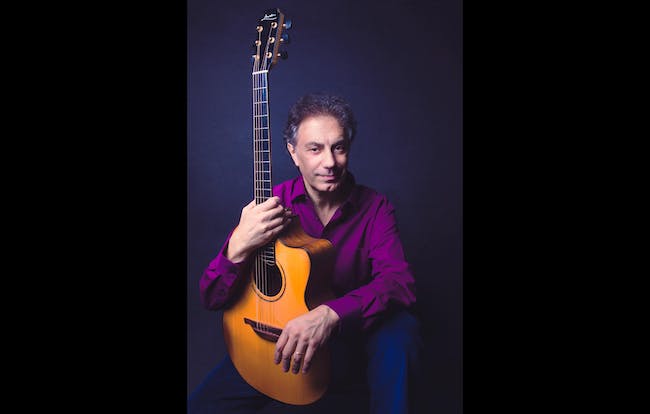 "The way the guitar would want to sound if it played itself. -- Nyack News and Views

Back in 1974, Pierre Bensusan (www.pierrebensusan.com) was cutting his teeth as a performer on the folk scene in Paris and other cities in France when one of his idols, banjo great Bill Keith, offered him his first official paying gig ever touring Western Europe with his bluegrass band. The French-Algerian upstart, humbly launching a four decade career was hired to play mandolin. But when Keith heard his groundbreaking approach to the acoustic guitar, he decided to allow Bensusan a few key spotlights on that instrument.

Decades later, when Bensusan was looking for potential finishing touches for "Encore", his ambitious and expansive retrospective collection celebrating 40 years as a globetrotting live performer, he discovered a reel to reel tape with a Swiss National Radio recording of a concert in Lausanne from that tour. While the tireless troubadour’s original plan for the 3-CD set was to include tracks recorded between 1998 and 2013 in France, Canada, Ireland, Austria and especially the U.S. (where he regularly records), Bensusan decided to round out the 35-track set by starting “Disc 2” with a set of five titles from this show, including two bluegrass songs.

Engineered in Los Angeles by Grammy winner Rich Breen, Encore also includes a handful of songs featuring Bensusan’s beautiful French language vocals (“Cordilliere” and “Pas Sage,” among others) and wordless vocalese (“Bamboul’hiver”); two cuts with future Dream Theater keyboardist Jordan Rudess from a commissioned 1998 concert in Northern France that included a 200-piece children’s choir (including the previously unreleased “Anthem For The Ocean”); and the 18-minute setpiece “Celtic Medley.” In all, Encore features 11 tracks never previously released commercially in any form.