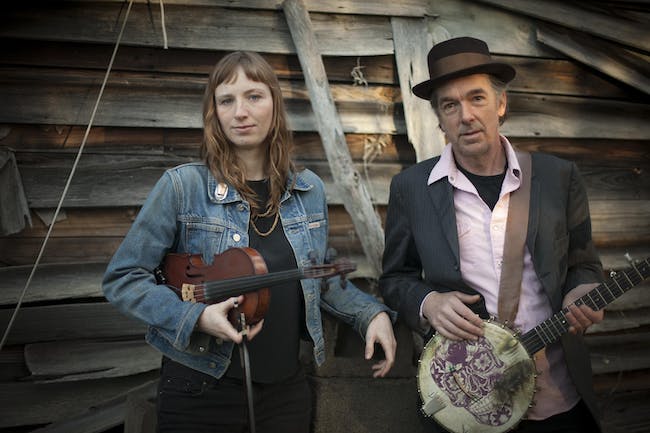 iCal
Google
Richie and Rosie at The Parlor Room

Richie Stearns and Rosie Newton grew up a 150 miles and few decades apart. While both were raised by professional cellist, Richie started playing banjo at 14 and Rosie began classical piano lessons at eight, eventually moving to classical viola as a teen. Both shared incredibly unique, musically-immersed childhoods: Richie’s family founded the iconic GrassRoots Festival of Music & Dance (which he is now President of) and by her junior year of high school, Rosie was playing fiddle and touring with folk rock band The Mammals. During that time, the two were introduced at Saratoga Springs’ Flurry festival -- a meeting that would spark a fated friendship and unique musical bond.

“He left an impression on me because he was wearing Converse. I had never seen an adult wear Converse before,” said Rosie, reflecting back on the first time she shared the stage with Richie. As a Woodstock native, she graduated high school and decided to move to Ithaca after being drawn to the thriving old-time scene -- which happened to also be Richie’s stomping grounds. While studying viola at Ithaca College and playing fiddle on the side, Rosie started incorporating folk with her traditional Celtic and classical upbringing. Meanwhile, Richie was a well-established singer and banjo player in the community, having performed around the world with bands like Bela Fleck, Pete Seeger, David Byrne, Billy Bragg & Wilco, Old Crow Medicine Show, and Joan Baez. In addition to releasing two solo albums, Richie was adding to his endless discography, which includes three Natalie Merchant records, multiple collaborations with Jim Lauderdale and Donna The Buffalo, and Carrie Rodriguez.

During Rosie’s freshman year, the two finally began touring together regionally as part of the Evil City String Band, where they were joined by bass player Ben Gould, Steve Selin on Fiddle (in addition to Rosie), and guitarist Paddy Burke. Eventually, they decided to pursue a more intimate project as a duo and in 2013, released Tractor Beam, a 12-track mix of originals and classics, including Townes Van Zandt’s “If I Needed You” and “Say Darlin’ Say”, a traditional lullaby. Being their first exclusive release as Richie and Rosie, the pair wanted to give fans a polished recording of the songs that they played live.

After three years of touring and writing, the duo returned to the studio last December to record their second full-length album, Nowhere in Time. The record finds itself at a junction of Americana, old-time, and folk, bringing a new sound to traditional music. Recorded with producer Alex Perialas at Pyramid Sound Studios, the album highlights the incredibly-refined skill of both musicians -- and while the majority of the album is a simple combination of fiddle, banjo, and captivating melodies, the duo manages to pack an incredibly full sound. “At the beginning, we were thinking it might be a project with lots of other people involved, more of a big production. As we went through it, we realized that the magic lies within the duo. We have an intimacy of music and we feel the power of two people playing. That’s who we are,” said Rosie.

Nowhere in Time gives fans a look inside the band’s personal lives, with a variety of introspective lyrics. While some songs are more light-hearted, like “Honey Bee”, which Richie wrote to “lure” his girlfriend back to the East Coast, others face more serious topics. Rosie stepped out of her comfort zone for one of the few lyrical co-writes between the two, “No Longer Lonely”, to write about a close friend passing away. “I actually began writing it a couple of years ago -- I would give it to Richie, he would tweak it, and we ended up going back and forth maybe six times. It was a different way for both of us to work and humbling to have our creativity challenged by each other. In the end, we came up with something really beautiful that reflects both of our musicality. I needed to see something beautiful come out of that dark moment.”

However, the most interesting story on the album might be the one behind the title track. After receiving an unexpected phone call from the AARP, Richie wrote a song for the organization that chronicled ‘life after 50’, in addition to other ultra-specific stipulations. “They set up a recording date for the song before it was even written. So I’m sitting in my living room, crumpling up paper and trying to write a song about reinventing yourself after 50. I thought, ‘I’m going nowhere with this’” Richie says about the song that turned into appreciating the present, “That’s what the song was actually born out of. You can look back and look forward, but we aren’t done with life, we’re just where we are. It’s about focusing on the moment.”

Ironically, the commissioned song became one of their most well-received songs and defined exactly what the duo hopes to achieve -- music that many can connect with. With the fated combination of Richie and Rosie’s unique skill, varied musical influence, and honest storytelling, Nowhere in Time does just that. As two musicians in two very different parts of life, Richie and Rosie are proof of two things: the power and magic of two people making music, and that the universal messages that lie within their songs will remain timeless. 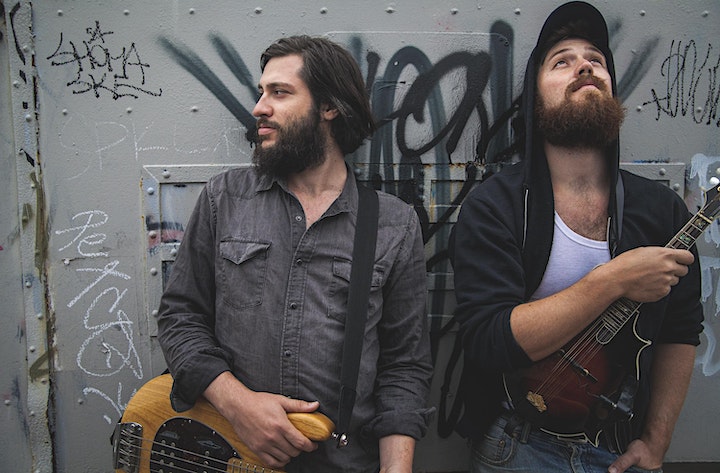 Bassist Bobby Szafranski first lent his velvet touch to the back-handed poetry and full-throated ruckus of mandolin-wrestler Owen Lyman-Schmidt’s solo work in 2013. Since then the duo has been leapfrogging their way up and down the East coast bringing their unlikely sound to bars, living rooms, rooftops, and back alleys.

Scavenger’s Joy, Driftwood Soldier’s 2015 debut, established that musical range for audiences everywhere, with two-thirds of the songs receiving radio play on dozens of radio stations around the country including WFUV, WNCW, and WXPN, where Bruce Warren called the duo “a bluesy version of Nick Cave with a nod to Tom Waits.”

In early 2017, they followed the breadth of Scavenger’s Joy with the focused intensity of Blessings & Blasphemy, a concept EP exploring the tension between spirituality and dogma by reinterpreting gospel traditionals alongside anti-religious originals.

Now, with Stay Ahead of the Wolf on the way, Driftwood Soldier is bringing their first two records and their liver-shaking live show to some of their favorite spots up and down the East coast. Don’t miss the chance to hear this new beast howl!