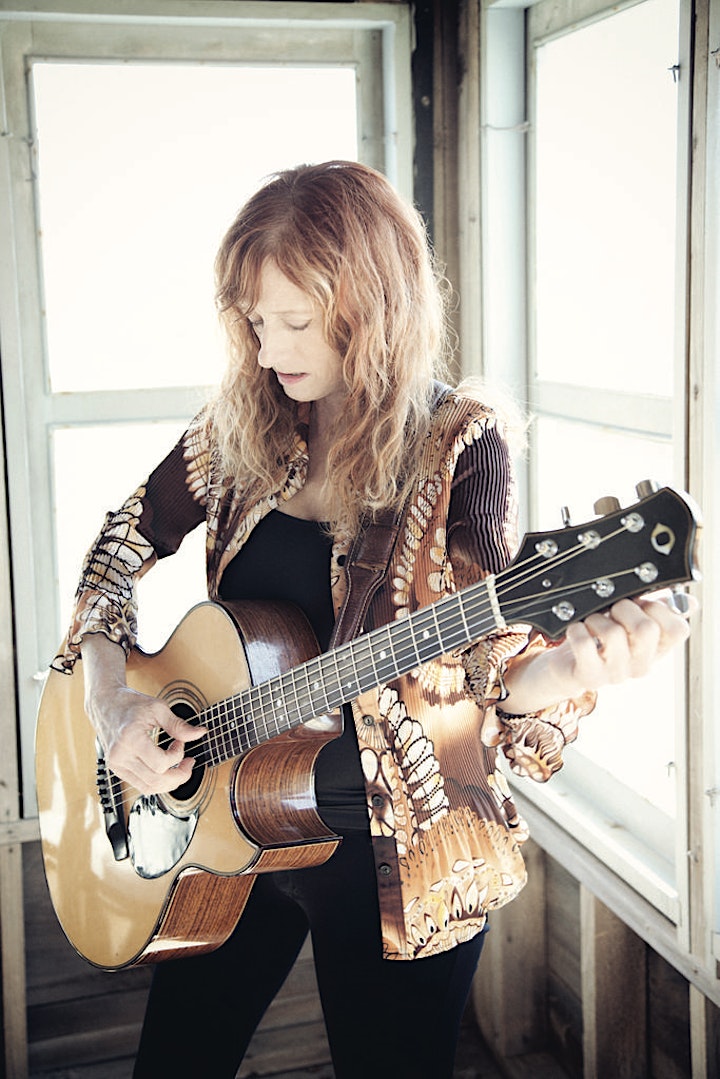 PATTY LARKIN is a visionary of sound and wonder, a real deal version of artistry made of equal parts guitar wizardry, vocals shot through with soul and inventive lyrics that ripple across the terrain of the heart. Described as “riveting” (Chicago Tribune), “hypnotic” (Entertainment Weekly), and a “drop-dead brilliant” performer (Performing Songwriter), Patty has captured audiences for over 30 years with an imagination, enchantment, and technical artistry that has redefined the boundaries of the guitar driven singer songwriter.

With eleven studio albums and two live recordings under her belt, Patty mines the intersections of poetry and song with her innovative 14th release, Bird in a Cage, released on her own Road Narrows Records. Bird in a Cage puts poems from ten notable poets to song, including US Poet Laureates William Carlos Williams, Stanley Kunitz, Kay Ryan, Robert Pinsky and Billy Collins, for a new and haunting collection that pulses with the magic of lyricism. Poems are made to be shared aloud, and with Bird, Patty takes up that tradition and sets it aglow: her extraordinary musical shadings make each poem a star.

Bird in a Cage grew out of her songwriting practice. As Patty describes it, “Over the years I began my writing days by reading my favorite poets just to be amazed and inspired. I looked to poetry as I look at nature: with awe. This morning ritual evolved into a desire to make music of some of my favorite poems. The rhythm and cadence of the lines felt new and fresh to me, the melody slowly revealing itself. And uncovering a melody that is slowly revealed by the words was pure joy.”

This new album leaves standard songwriting forms behind, crossing instead into a world where rhyme is optional and phrases unfold at their own speed. Bird in a Cage embraces those creative spaces where boundaries are fluid; its ten tracks are full of cross-disciplinary energy, the hot spark of one artist collaborating with another. The album’s liner notes say it best with this reflection from Patty on Bird’s genesis: “This project is my way of holding brilliance in my hand.”

Bird was co-produced by Patty and Mike Denneen, who Patty has called her “musical compass.” Their collaboration spanned 16 years and 5 albums. Mike, whose work as a record producer was nothing short of genius (Aimee Mann, Howie Day, Jen Trynin, Letters To Cleo), passed away in July of 2018, just shy of Bird’s completion. For Bird in a Cage, Mike created a lush sonic landscape, playing vintage keyboards on several tracks. Patty and Mike’s shared vision for an album with layered, atmospheric sound was secured with backup support from friends Jonatha Brooke (vocals and guitar), Merrie Amsterburg (vocals) and Marc Schulman (electric guitar), and strings by Catherine Bent (cello) and the Parkington Sisters (violin, viola, vocals). Patty’s long-time drummer and percussionist, Ben Wittman, kicks up the mix on the last track, an inspired version of Billy Collins’ “Introduction to Poetry.”

Patty’s recent projects include Still Green, an album written in a dune shack on the Outer Banks of Cape Cod’s National Seashore, and 25, a retrospective album that includes the contributions of 25 friends, among them Grammy award winners Rosanne Cash, Suzanne Vega, Shawn Colvin, and Janis Ian, as well as acclaimed singer songwriters Bruce Cockburn, Mary Chapin Carpenter, and Greg Brown, among others. Patty was the Executive Producer of the groundbreaking La Guitara, a compilation of women guitarists actively changing preconceptions about gender and guitar heroes.

Patty was raised in the Midwest, and is a descendant of a long line of Irish American singers and taletellers. Her mother was a painter, and her sisters are both musicians. She studied English Literature and Folklore in the Pacific Northwest, as well as jazz guitar and voice at the Berklee College of Music. While in Boston, Patty honed her performance chops in listening rooms, clubs, and festivals.

Her songs have been covered by various artists including Cher and Holly Cole and have been featured in television and film including Evolution (DreamWorks); Random Hearts (Columbia Pictures); Sliding Doors (Miramax); and Men in Trees. With 11 Boston Music Awards to her credit, Patty is also the recipient of an Honorary Doctorate of Music from Berklee College of Music and she has been honored by Boston Mayor Thomas Menino for her music and philanthropy. She lives with her family on Cape Cod.