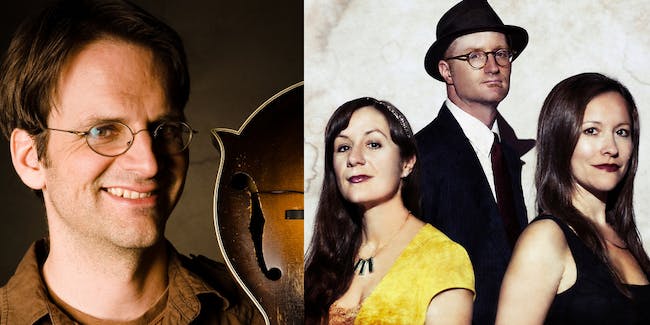 Multi-award-winning bluegrass mandolinist Matt Flinner teams up with American Roots band Low Lily for a celebration of the Winter Solstice! This energetic show will feature bluegrass and old time influenced original instrumentals alongside impeccably arranged songs to mark the season. Between them, the musicians will play mandolins, guitars, fiddle, banjo, double bass, and sing in three and four part vocal harmonies.

Multi-instrumentalist Matt Flinner has made a career out of playing acoustic music in new ways. Starting out as a banjo prodigy who was playing bluegrass festivals before he entered his teens, Flinner later took up the mandolin, won the National Banjo Contest at Winfield Kansas in 1990, and took the mandolin award there the following year. Since then, he has become recognized as one of the premiere mandolinists as well as one of the finest new acoustic/roots music composers today.

“Flinner continues his reign as perhaps the most exciting and creative mandolin player on the scene today.”—Jazz Times

“(Flinner) blurs the lines between jazz and bluegrass, traditional and avant-garde.”—Associated Press

“Flinner provides the next logical evolutionary step to David Grisman’s unique ‘Dawg’ style, and does it with a nod to the past and a vision of the future.”—Bluegrass Now

With a vocal blend that has been dubbed “outstanding” and “meticulous,” Low Lily’s cohesive sound comes naturally for musicians whose lives have been entwined on the road and onstage for almost two decades. Setting down roots in Brattleboro, Vermont, the band has crafted a signature sound which they have shared with enthusiastic audiences throughout North America and the UK, garnering two #1 songs on international folk radio and two Independent Music Award wins.

Chosen as Falcon Ridge Folk Festival’s “Most Wanted Band” of 2016, Low Lily plays acoustic music that is deeply rooted in tradition yet sounds refreshingly contemporary. With their first full-album release, “10,000 Days Like These” (March 2018, following their 2015 self-titled EP release), Low Lily shares an intimate, no-tricks-involved, collection of songs that showcases their talents and proves them to be a formidable, ready-for-prime-time act. A first album this strong doesn’t come from newbies– all the members have performed with numerous well-known names in folk and traditional music. Flynn Cohen has toured with Ruth Moody, John Whelan, Cathie Ryan and Aoife Clancy. Liz Simmons has performed with Tom Chapin, Livingston Taylor, Melanie, and Long Time Courting. Lissa Schneckenburger has traveled the world as a solo act as well as with Solas and Childsplay. Their sideman, bassist Corey DiMario, was a founding member of Crooked Still, and has been a mainstay of the Sweetback Sisters and the Karan Casey Band.

“Low Lily brandishes their formidable individual folk foundations within a collective sound that’s as smart with sense of pop phrasing and flair as it is roots-savvy.” –Roots Music Report

“[Low Lily has] an incredible knack for putting a little pop twist on a traditional folk/Americana sound... it’s a blend that works beautifully.” –PopMatters